Bob (named changed pending client approval), our client, a disabled United States Marine veteran who had been seriously injured in Iraq, had recently returned to the Bay Area with a goal of putting his life back together. Bob was attending HastingsCollege of the Law. Bob was commuting to law school on his bicycle, when he faced every bicyclist’s nightmare. As he was riding straight down the street, only one block from school, Bob was hit from behind and thrown violently to the pavement (see below, a still from the video showing the vehicle and bicycle in contact). 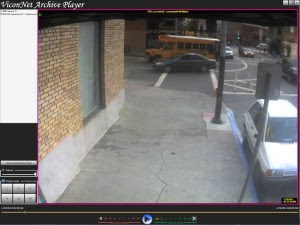 The driver of the Lexus who struck our bicyclist was a retired railroad lawyer who claimed that because he had never seen the bicycle rider, the bicyclist must have done something wrong, like making an unsafe turn into the path of his car. The video is clear that this bicycle rider was doing the right thing, claiming the lane by riding three feet from the lane’s right edge, which was a signal to motorists who were about to make a right turn onto Leavenworth that they should not pass the bicycle rider before making that right turn. Still, this motorist passed this bicycle rider. With a car six feet wide, and a bicycle rider who was three feet from the edge of the lane, there simply was not enough room when you add the handlebars and the mirror of the car. The mirror clipped Bob’s handlebar, and this caused him to lose control and to hit the ground hard.

Our theory of liability was more direct than the defendant’s; This motorist simply failed to properly check the road for other vehicles, including cyclists, and passed too closely to Bob, clipping the bicycle’s handlebar with his passenger side mirror. It is useful to note that, at the time of the collision, the California “Three Foot Law” was not yet in effect, but California Vehicle Code Section 21750 clearly stated that “(a) The driver of a vehicle overtaking another vehicle or a bicycle proceeding in the same direction shall pass to the left at a safe distance without interfering with the safe operation of the overtaken vehicle or bicycle.”

Until recently, a motorist’s defense of “I didn’t see him, so he must have been doing something wrong” may have been more successful. Indeed, as attorneys who have been protecting the rights of injured bicycle riders for years, we know all too well that many jurors simply do not feel they can be fair to bicyclists in a case where the bicycle rider has been struck by a car. In fact, many potential jurors in our case were brave enough to admit their negative feelings about bicycles on San Francisco streets. Thankfully for this trial, the Court was committed to empanelling a fair and impartial jury. Although a great win for our client, allowing him to collect medical damages as well as money for a future surgery and for his pain and suffering, I see this verdict as an even greater win for San Francisco bicycle riders, especially commuters. Cases like this make it clear that a motorist must follow the rules and safely share the road with bicycles or be held fully accountable for any harm they cause to a bicycle rider.

We encourage you to comment or ask questions about the case or about bicycle safety and bicycle collisions in general, and anyone interested in our advocacy for San Francisco cyclists is welcome to reach out directly, we’d love to hear form you. We hope this post will help to further the cause of awareness and understanding of cycling City-wide.

Hello, I’m Claude Wyle, a San Francisco bicycle accident attorney. Have an idea for a topic you’d like to see covered here? Feel free to contact me or visit www.ccwlawyers.com